Tina Yates and Cicomein VDL Have A Double Victory

Tina Yates and Cicomein VDL Win $5,000 1.40m Jumper Classic & $5,000 Interactive Mortgage Under 25 Series Qualifier
San Juan Capistrano, CA – Scoring wins in both the $5,000 1.40m Jumper Classic and the $5,000 Interactive Mortgage Under 25 Series Qualifier, which were run concurrently, Tina Yates and Cicomein VDL had the enviable position of last to go in the jump-off. The speedy duo completed a double-clear effort in a time of 46.50 seconds for the win.

Of the seven riders who qualified for the jump-off, four finished fault-free, and each one was faster than the one before. When Yates blazed through the timers, she was a full 3.78 seconds faster than the second place finisher, whose quick effort had seemed impossible to beat.

“Cici, as we call her, is just naturally quick. Her foot speed is incredibly fast,” Yates described of her winning mount. “All I have to do is think about the track, and keep her straight over the jumps so she doesn’t cut in when I’m slicing the verticals.”

With one double combination and one triple, numerous related distances, and lines that required a variety of stride lengths, the course, also built by Petersen, Jr., was a tough test for the thirty starters. “I thought that the course asked the horses questions in several places,” Yates said. “There was a lot of adjusting going on.”

In her last year riding in the Interactive Mortgage Under 25 Series, Yates has plans to compete in the Series Final at The Las Vegas National Horse Show in November. 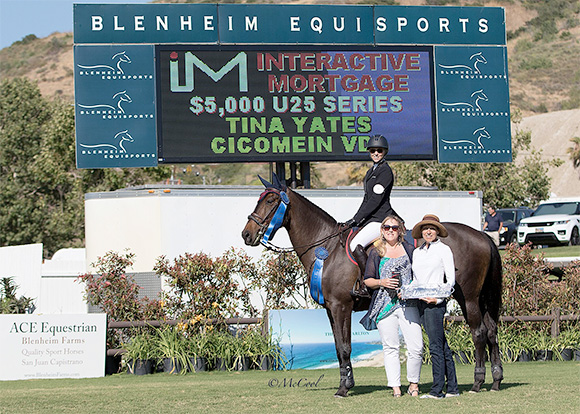