Posted on The Colorado Horse Park 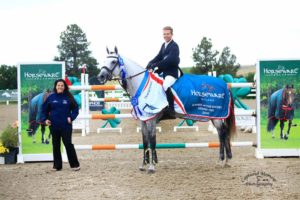 Durango VDL, owned by Highpoint Farm LLC, and Casady finished their lightning-fast jump-off round in 43.346 seconds. Casady, of Harriman, TN, has been riding the 2008 Dutch stallion for Craig and Tina Yates for three months and is thriving with the new partnership. “We’re still in the beginning of everything, but we’re starting to gel together,” Cassady said of Durango VDL. “I have gotten to know him a little bit. We’re still testing and tweaking things, but hoping for the best.”

Casady spoke highly of the course, designed by Marina Azevedo. “I really enjoyed the course. There were a lot of options. It asked several questions, but I think that’s good.” Casady rode to victory by way of “trimming the fat” in the jump-off. “You have to make a plan and stick with it,” he summarized.”