[Del Mar, CA] The competition escalated this past weekend in Southern California with back to back main events that drew huge crowds, perfect weather and intense competition. The $10,000 USHJA International Hunter Derby and the $30,000 Racing Festival Grand Prix on Sunday, July 29th spurred some serious battles between competitors that left the audience on their toes and thirsty for more.

The season has developed two rivalries in both the Hunters and Jumpers. Nick Haness was Champion again in the Hunter Derby on Saturday, breaking veteran John French’s win streak aboard the famous Small Affair and young gun Tina Di Landri stole the show by outrunning the fearless Josephina Nor Lanzman in the jump-off.

Thirty six combinations and seven countries showed up to prove their abilities over the very technical track laid out by Mexican course designer Catzy Cruz. “I wanted to ask the field some questions and see who could answer them,” Cruz commented on the large field of mixed levels of ability and experience. The technical track invited numerous questions including a challenging bending line to a skinny vertical taking more than a dozen victims. Other challenges included an oxer-vertical-oxer triple combination to which, “had an awkward distance that you had to approach correctly to get through,” noted Cruz. Only five lucky duos were able to answer Cruz’ questions correctly and earn a ticket to the jump-off.

Hap Hansen, sitting on his 99th Grand Prix victory, was the first to return in the jump-off and set the stage aboard the almighty Archie Bunker. Hansen was setting up what looked to be that matchless 100th win, but with an unlucky rail Hansen and Archie Bunker finished with four faults in a time of 40.436 seconds. Coming off her win in the $30,000 Red, White and Blue Grand Prix, Brazilian rider Josephina Nor-Lantzman and Chello Z were the next contenders to top the leaderboard. Nor-Lantzman, not being one to hope for the best, knew a fast clean round was in order to secure the win.

Knowing her horse’s abilities, Nor-Lantzman piloted Chello Z to a flawless jump-off, bolting through lines and cutting every corner possible to trip the wire in 39.317 seconds. Michelle Parker and Xel Ha was the third pair to challenge the finalists. Just as it had in the qualifying round, the skinny vertical took another victim and with an additional rail on the final line, Parker and Xel Ha finished with eight faults in a quck time of 36.912 seconds. 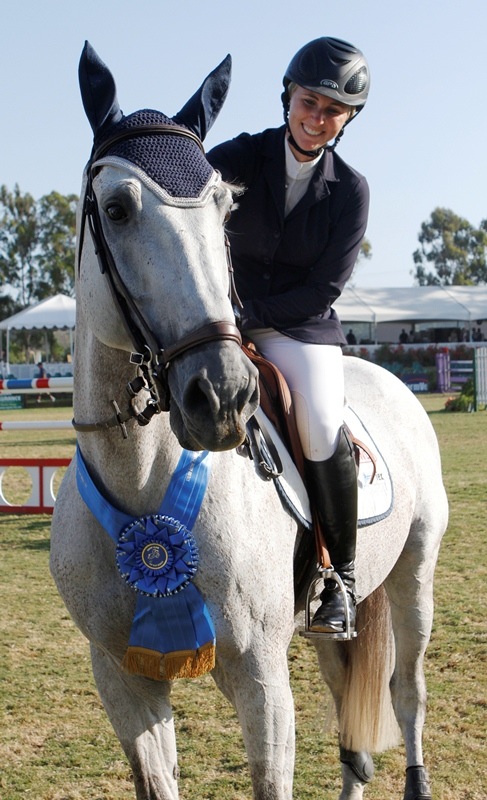 Avargo is so good at what he does. I’m so proud of him,” shared Di Landri of her winning mount.

The rivalry between Nor-Lantzman and Di Landri re-emerged as Di Landri galloped into the ring. “I completely changed my jump-off plan after Phina (Josephina) went, “Di Landri laughed. “She was quick, so I knew I had to leave some strides out and go for it. They left the skinny vertical which was risky but Avargo is so good and when you gotta go you gotta go.” Di Landri charged through the track leaving all the rails in the cups, posting a time of 37.355 seconds, shifting Nor-Lantzman to second. Antonio Maurer (MEX) was the final rider to challenge Di Landri’s post. Maurer guided Callao through a swift round but with one unfortunate rail, Maurer would finish with a four fault time of 36.878 seconds, good enough for third place.