By Kim F. Miller for ridingmagazine.com

I’m a bit on cloud 9,” said Tina DiLandri Yates of her third place finish in last November’s Longines FEI World Cup™ class in Las Vegas aboard Zelote VDL. She went to Vegas without expectations about her placement, but wound up at the winners’ press conference after giving German veteran Christian Heineking, the victor, and Mexican Olympian Enrique Gonzales a run for their money in the jump-off. 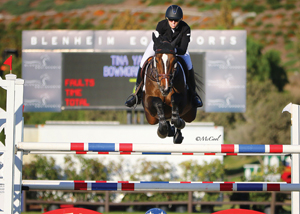 Tina & Bowmore VDL going for the win in the Markel Insurance Grand Prix. Photo by McCool.

The 26-year-old may not have been prepared for that press conference, but she’s prepared to win on ever-bigger stages in her pursuit of representing the U.S. internationally. She’s accumulating horses, owners and sponsors that form a strong support system and wins that suggest such finishes may become routine in the near future.

Tina was a hot-shot equitation and jumper rider as a junior in the mid- to late-2000s. She’s from Scottsdale, AZ, but spent many weekends competing on the West Coast, along with trips back East for the Indoors circuit. This month, she returns to her California stomping grounds with an impressive string of horses and her new husband and business partner, British horseman Jonathen Craig Yates. 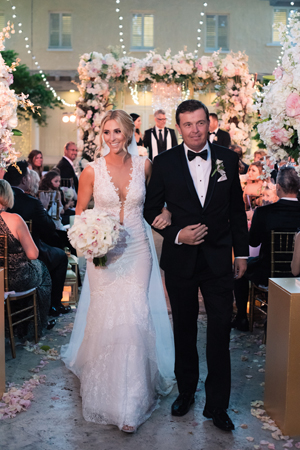 Tina and Craig (as he mostly goes by) will base their Highpoint Farm South out of the Cotton family’s ACE Equestrian at the private Blenheim Farms in San Juan Capistrano. The plan is to start with the Blenheim EquiSports Spring Series this month then stay based in the West through November. They did that last year, culminating in the strong Las Vegas World Cup finish. Then they’ll return to their winter headquarters in Wellington, FL for the Winter Equestrian Festival.

A specific show itinerary is open-ended in hopes that Tina’s immediate goal of making a USEF Developing Rider Nations Cup team will be realized. Targeting the 2020 Olympic team for Tokyo is the long-term goal. She admits she’s relatively new to the top level of the sport, but has an advantage in a deep string of horses.

Tina rides five horses for Eva Castagren’s HKC Collection, LLC, including Cicomein VDL, a horse the couple imported as a 6-year-old and were happy to welcome back to their stable. Plus, Tina’s “top dog,” Zelote VDL. They’ve developed together for the last four years and “I know him like the back of my hand and he’s definitely helped get me to this next level.” He’s by the two-time Olympian Chin Chin VDL and represents the caliber of horses provided by major backer Eva Castagren. “Eva is a very big part of my career development,” notes Tina.

She’ll resume work with four of ACE Equestrian’s jumpers, and another who is returning with her from Wellington. Tina’s brother and dad, Ralph, have teamed up in sponsoring another top Grand Prix prospect, Campitello 5.

Tina hopes this West Coast season will be as fruitful as last year’s. That included a highly unusual tie riding two horses in the mid-September $30,000 Markel Insurance Grand Prix. She had clean rounds and exactly the same jump-off time – 35.25 seconds – aboard the mare Cicomein VDL and the stallion, Bowmore VDL, 9 and 10-year-old Dutch Warmbloods.

The Markel Insurance Grand Prix and the Interactive Mortgage U25 Developing Rider series are among the new programs that sweetened the prospect of returning to the West. “These are great classes at great shows and perfect for developing our young horses,” Tina explains. She also has high praise for the West Coast fall indoor circuit built up around the Longines FEI World Cup™ North American League West.

Competing throughout the Winter Equestrian Festival, she hears more riders raving about the West Coast circuit, either because they’ve been there, like Kent Farrington, or they plan to come in the near future. “They are good venues, good prize money,” she explains. ‘It’s a very attractive circuit.”

West Coast winners’ circles are familiar turf for Tina, but a steep learning curve stood between getting there as a junior and returning as an amateur and a professional. The steepest part of the curve sits in Florida. “When you are in California, you can become so-called ‘famous’ very fast,” Tina reflects of her first forays into the Winter Equestrian Festival. “I thought, ‘No problem. I can jump all those classes!”

“Then you get there and the High Amateur courses are massive, the quality of horses and riders is amazing. All of the sudden my confidence went down. It was a blow to my ego, but it was something that needed to happen.”

Craig helped her hit that epiphany. “He was the one to say, ‘Hey, you can’t just walk in there and jump these classes. This is a very big stepping stone.’ He never said I couldn’t accomplish something in Florida, but he helped me see that it’s a progression. There has been a lot of time, hard work and tears that have gone into this already.”

Part of the progression is being able to observe and interact with the world’s top riders in Florida, Tina continues. “It inspires you to get better and you see how you just have to rise to the occasion because there are so many good riders here.”
Coming back West, Tina enjoys being able to visit her big family in Scottsdale and retrace her earliest equestrian milestones.

“No way!” was Pattie DiLandri’s response when her daughter begged to ride during daily drive-bys of Janet Hischer’s neighboring Twisted Tree Farm. Eventually she gave in and also persuaded Janet to take on an under-5-year-old. “Within a week of my first lesson I was jumping,” Tina recalls.

Becky Warner introduced her to the equitation world and found Scuba, with whom Tina came to dominate the division. Pam Stubbs played her part, too, giving Tina the ride on a Childrens Hunter, Showman, who put her on the map in that division. Along the way, “Pam had me taking bridles apart and putting them back together, learning how to rasp a horse’s hoof and all kinds of other Pony Club things.” Tina admits she wasn’t crazy about that as a kid, but is now grateful for the horsemanship it fostered.

In her mid-teens, Tina began competing in California regularly, riding under Karen Healey’s tutelage at shows. During her last junior year, she trained with East Coast-based equitation expert Andre Dignelli.

It was a whirlwind junior career, after which Tina took a break to determine whether an adult life with horses is what she really wanted. Less than a year out of the sport, she realized it was.

She bought a jumper, Avargo, and went to Mike and Christa Endicott’s program in San Diego to tackle the Grand Prix ranks, including the Olympic selection trials in 2008. She switched between amateur and professional status, then went pro for good when she settled in Florida. By then her acquaintance with Craig Yates had become more than that. They met through a breeding inquiry while he was training for the top jumper breeding program, Hyperion Stud, in Florida. Three youngsters out of Tina’s Junior Jumper Chanel 292 and a marriage, on New Year’s Eve in 2015, are among the good results of that connection.

A 3-year-old by Hyperion Stud’s Indoctro son Imothep, a 2014 and 2016 Olympic contender, is the oldest of Chanel’s babies. Tina and her mother partnered up in the breedings “mostly for fun” but their bloodlines suggest they could develop into more than a fun hobby.

Meantime, Tina and Craig look forward to their extended West Coast season with high hopes for their young horses and for Tina’s continued upward trek in the Grand Prix world.