San Juan Capistrano, CA – On a warm California Saturday afternoon, Yates claimed yet another $30,000 Markel Insurance 1.40m Grand Prix, presented by ACE Equestrian, at the International Jumping Festival. In a grand prix field of 35 horse and rider combinations and 15 in the concurrently running Interactive Mortgage U25 class, a total of six qualified for the jump-off. Entering in the enviable last to go position, Tina Yates was double clean on Highpoint Farm, LLC’s Bowmore VDL edging out Markel Insurance Grand Prix Series leader Michelle Parker aboard Cross Creek Farm, Inc.’s Cupilor by half of a second for the victory in both classes.

Notably, Yates and HKC Collection, LLC’s Cicomein VDL, also clean in the first round, were remarkably fast in the jump-off, stopping the clock in 38.35, with an unfortunate rail towards the end finishing fifth in the grand prix, third in the U25 class but picking up the SmartPak “Fastest Jumper in the West” Award, earning a $500 shopping spree at SmartPak.

As a U25 rider, Yates also won the Interactive Mortgage U25 Series Qualifier aboard Bowmore VDL. Four of the six jump-off rides were also competing in the U25 class.

FEI Course Designer Olaf Petersen, Jr. mentioned several spots on his track that would challenge the class. “Fence 2 is just plain white rails, which is always a little more difficult. We have a right turn to number 3, which is darker, after the very light, bright color, a little bit difficult, then a left turn to another vertical. Number 8, triple bar with butterflies, horses always look a little bit under there, so it will be difficult. And then we go to two verticals, number 9 and number 10, which is a flat five, so I guess that some horses may do six strides. And then a left turn to the oxer, and from here, time is already a factor, so you can’t take too much time for the roll back. The last jump is also white-poles, a square oxer with a liverpool, off a flat seven or a waiting eight.”

After the first two entries went clean, rails began to fall throughout the field, including the black and white pin-striped vertical at fence 10 and the square oxer at the final fence, which came down multiple times. The time allowed played a crucial role, as four riders had no rails but accrued time faults, and did not qualify to return. This included the veteran pair Chello Z and Josephina Nor Lantzman who clocked in at 82.25 in the 82 second time allotment for a single time fault, and LEGIS Touch the Sun with Jenni McAllister in the irons, who picked up 3 time faults, ultimately seventh and eighth places for the class. More than half of the class exceeded the time allowed.

Petersen narrowed the field for the jump-off to six. Starting with the triple bar in a gallop to the pin striped vertical, some rollbacks and two new elements, there were plenty of spots to get a good gallop and execute tight turns.

First to return, Cupilor with Parker (pictured right), did the trailblazing well, fault-free in an even 40.00. Yates, competing in both the grand prix and the U25 classes, was in on Cicomein VDL next, fast but with four faults. Third to go, accomplished U25 rider, Nayel Nassar, rode Baraka beautifully, clean in 40.86, just not quite fast enough. In galloped yet another pair of rising stars, the talented Disco Lady (owned by Neil Jones Equestrian, Inc.) piloted by U25 rider Mavis Spencer. In an amazing fast 39.51 the pair had the pin-striped rail down for four faults.

Zanzibar and Jill Humphrey took the conservative option, clean in 46.04. Last and fast, Bowmore VDL and Yates captured the blue when they galloped through the timers in 39.46.

Leading the victory gallop for the second week in a row, Yates complimented the course designer. “I thought Olaf did a great job with the course and also the jump-off, especially with the first jump being a triple bar and then a very long gallop to a plank vertical with pin-stripe rails, which is a very tricky fence. Then again a quick rollback, and galloping to the double, and then the last part was nice, just being efficient,” she said. 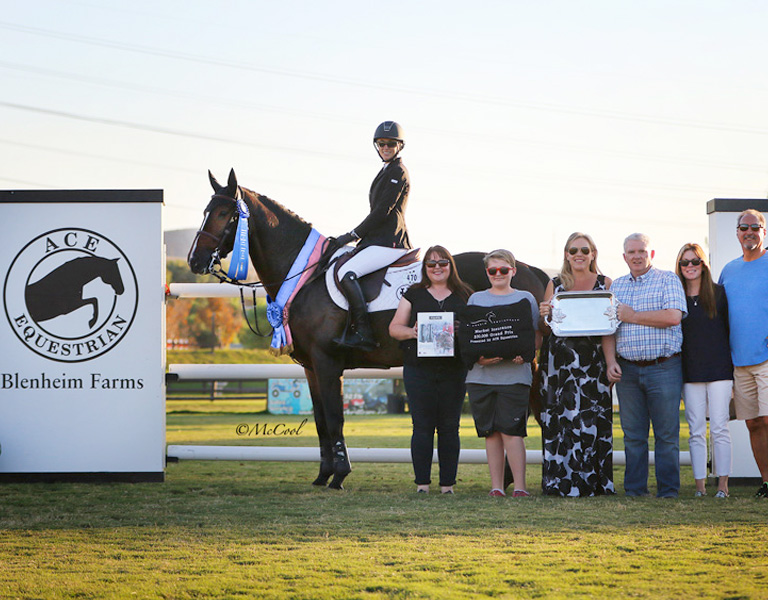 Yates went on to talk about her jump-off rides on both horses. “So the first horse, Cicomein VDL, she’s a very fast horse, just naturally. She has a very flat stride. So I knew I could go and just be efficient, and she was just going to be faster. I got a little bit unlucky to that fence, but I was very happy with her.

And then my next horse, he’s quite hot and bouncy, and I know that if I just let him go, he was going to be fast. I think I actually rode better on him in that first line because I let him gallop up there and I could wait for that plank vertical. A little bit the same on both horses, but I knew that I could be tighter on him, he rolls back pretty well.”

Yates will do the LA Masters and then Del Mar, Sunshine Series and wrap up her West Coast tour at The Las Vegas National, before returning home to Wellington, FL. “I’ll do the U25 Finals in Vegas, I think this should qualify me. I’ll bring three or four horses there. I might bring two FEI horses.”

The Interactive Mortgage U25 Series expanded to include two qualifiers at the HITS Sunshine Series in early November, so with the conclusion of this class, there are two classes remaining before the final list of invites for the Championship at The Las Vegas National is determined.

More highlights coming from the International Jumping Festival include: the $45,000 Blenheim EquiSports Young Jumper Championships, presented by Fairbanks Valley Farm, as well as the Veredus and Romfh Award Winners.