Wellington, FL – February 5, 2016 – Week four of the 2016 Winter Equestrian Festival (WEF) featured a busy schedule of competition, with jumper action on both sides of the Palm Beach International Equestrian Center (PBIEC) on Friday. The $35,000 Illustrated Properties 1.45m Classic was held in the International Ring on the main show grounds, with a win for Eduardo Menezes (BRA) and Caruschka 2 in the afternoon. The $25,000 Artisan Farms U25 Team Event, sponsored by The McNerney Family, was the highlight event in the International Ring at The Stadium at PBIEC in the evening. The competition saw a win for Team 3, which included Taylor Alexander, Emily Moffitt, Emma Heise, and Tina (DiLandri) Yates. 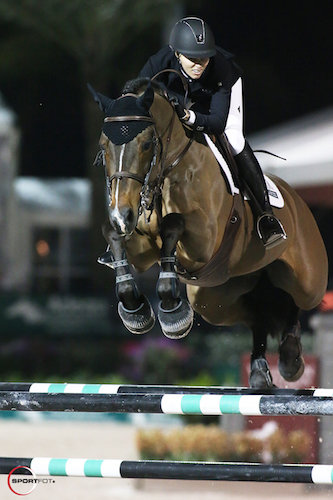 WEF 4, sponsored by Ariat®, continues through February 7, 2016, at the Palm Beach International Equestrian Center (PBIEC) in Wellington, FL. The week will feature the Great Charity Challenge presented by Fidelity Investments® on Saturday, February 6. Other highlights include the $35,000 Suncast® 1.50m Championship Jumper Classic on Saturday, and the $216,000 Ariat® Grand Prix CSI 4* in the WEF International Ring on Sunday. Also held on Saturday at The Stadium at PBIEC is the Asheville Regional Airport Wellington Eventing Showcase, presented by Wellington Equestrian Realty. All of these events will be live streamed at www.COTH.com. The 12-week WEF circuit runs through April 3 offering more than $9 million in prize money.

Seventeen teams made up of 65 riders in total contested a Richard Jeffery (GBR) designed course for Friday night’s $25,000 Artisan Farms Under 25 Team Event, sponsored by The McNerney Family. The top eight teams them returned in reverse order of merit based on their scores from the first round.

Combining the scores from both rounds of competition, three teams ended up in a tie for top honors on eight faults. A tie-breaking jump-off was then held with one rider from each team to determine the final standings.

Heise and Quentucky Jolly completed an unbeatable jump-off round that helped their team get the win. The 16-year-old rider from Chicago, IL, was competing in the event for the first time with the 12-year-old Selle Francais gelding (by Nirvana V) that she purchased at the end of last year’s WEF circuit.

Speaking of their partnership, Heise stated, “He is very special. He likes to do his own thing and he is definitely one of my more technical rides. It was difficult for me in the beginning to figure out how to get him bent around me in the turns going to the jumps because he likes to shift in a lot. He has come so far in such a short time. We really stared clicking a few months ago and this is the third or fourth big class that I have done him in. He is going amazing, and I did not really expect for us to click so well.”

“It has taken a little bit of time to get with him and stay on him, but he pulled through and jumped two amazing clear rounds,” Heise continued. “My plan was to send it in the jump-off. Go hard or go home. There were only three, so we were going to end up on the podium, so I figured I would give it a shot. We were the first ones in, so I did not have too much pressure because if I watch more, then I would have been too nervous. Going first was nice because I set the pace and stayed on it.”

Seventeen-year-old Emily Moffitt (Los Angeles, CA) was also competing in the class for the first time and jumped double clear aboard her mount, For Sale 6. Moffitt has only been riding the 10-year-old Westphalian mare (For Pleasure x Cassini I) for three weeks and was pleasantly surprised at the result.

“It was not in the plan to show her in this at all, so to have a double clear round is unreal,” Moffitt smiled. “She is the best horse I have ever ridden; everything about her is perfect.”

Taylor Alexander, of Castle Rock, CO, is 21 years old and competed in the Under 25 team event for the first time last year. Alexander was aboard her horse G&C Flash, a 14-year-old Hanoverian gelding (Forrester x Grannus), that she has had for two years.

“I got him as a seasoned horse; he has been there, done that, with a lot of people,” Alexander noted. “It is really nice to go in there on a horse who has done it all and done Nations Cups before.”

Yates (24) is from Scottsdale, AZ, and also competed in this team event last year. She bought her mount Zelote VDL three years ago and built the 12-year-old KWPN stallion (Chin Chin x Libero H) up to jumping the 1.40m level.

For Yates, competing in a team competition is a valuable part of any rider’s education and the Under 25 event provides the riders with great experience.

“You are always competing as an individual, so to be a part of a team is a great experience, especially because I am sure we all have aspirations to be on some Nations Cup teams and represent Team USA,” Yates said. “It is really great to come here and get a little feel for what that is like, and obviously winning is the icing on the cake.”

Heise agreed, stating, “It is a good stepping stone and I like the team feel. We never get to compete on teams, and it is so much better winning with a team than it is by yourself.”

Moffitt shared the sentiment, adding, “I think it is a great experience because it ups your pressure level a lot, but it is not from one extreme to the next; it gradually gets you ready for the big grand prix on Saturday nights.”

Presented by The Dutta Corp. in association with Guido Klatte, the Artisan Farms Under 25 Grand Prix Series will feature four more events showcasing top young talent in show jumping sport this winter. For the final event of the Series, the top 30 riders in the point standings will be invited to contest the $50,000 CSI-U25 Artisan Farms Under 25 Grand Prix Final held on the derby field at The Stadium at PBIEC on Saturday, March 26.