If you were on the horse show scene in California and kept an eye on Medal Finals season from 2007–2009, then you know the name Tina Dilandri. Hailing from Arizona, and training with Karen Healey, Chris Kappler, Andre Dignelli and more, she had blossomed into an equitation superstar, and had also made a name for herself in the junior jumper division. Along with multiple wins in the jumper ring, she earned top-three finishes in major equitation finals in 2007, including USEF Talent Search West (2nd), Pessoa/USEF Medal Final (3rd) and the WIHS Equitation Classic Final (2nd); was invited to ride in the 2008 George H. Morris Horsemastership Clinic in Wellington, and was 3rd in the 2009 Pessoa/USEF Medal Final. 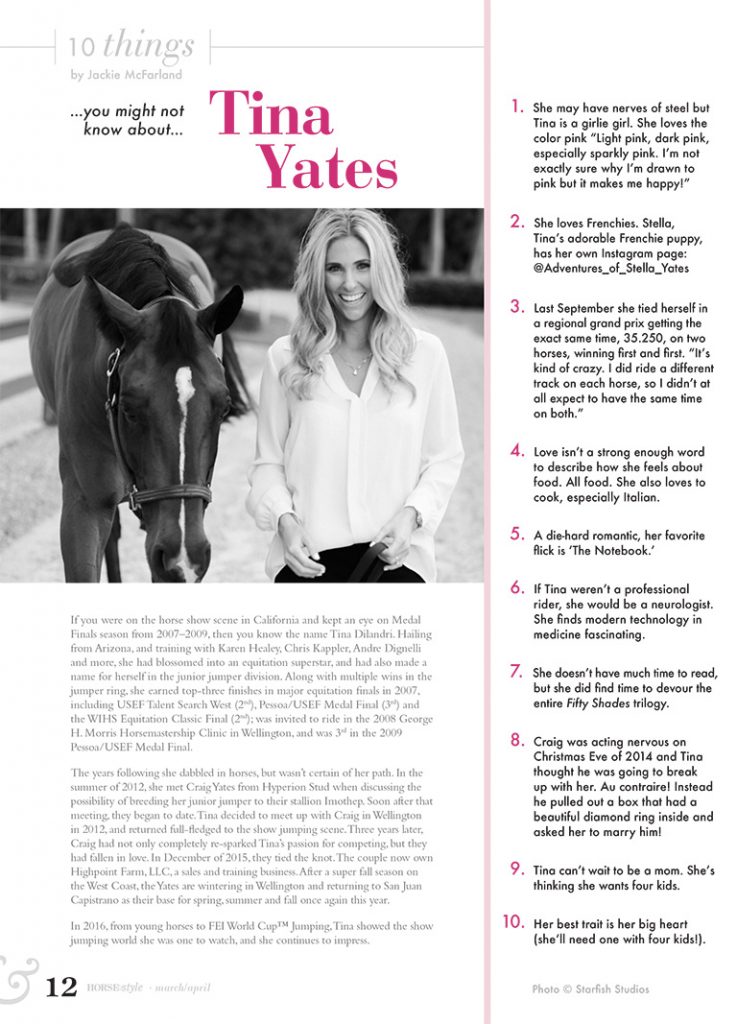 The years following she dabbled in horses, but wasn’t certain of her path. In the summer of 2012, she met Craig Yates from Hyperion Stud when discussing the possibility of breeding her junior jumper to their stallion Imothep. Soon after that meeting, they began to date. Tina decided to meet up with Craig in Wellington in 2012, and returned full-fledged to the show jumping scene. Three years later, Craig had not only completely re-sparked Tina’s passion for competing, but they had fallen in love. In December of 2015, they tied the knot. The couple now own Highpoint Farm, LLC, a sales and training business. After a super fall season on the West Coast, the Yates are wintering in Wellington and returning to San Juan Capistrano as their base for spring, summer and fall once again this year.

In 2016, from young horses to FEI World Cup™ Jumping, Tina showed the show jumping world she was one to watch, and she continues to impress.